The Premier Inn provided a lovely breakfast buffet this morning as Dave and I looked through our travel itinerary today. It was just a tick cooler, cloudier, but still nice out. A heavy fog over the ocean would obscure a more brilliant vista most of the day.

We were leaving Carrickfergus and going on to Islandmagee. Now, although my mother’s family name is Maggie, this island, which is actually a peninsula, isn’t a part of OUR Magee family. Dave’s years or research indicates our Magee ancestry related to Islandmagee is incorrectly stated throughout Ancestry.com and that placing the family origin on Islandmagee, is merely a matter of convenience, instead of based on any actual fact. Nonetheless, we stopped and paid our respects. 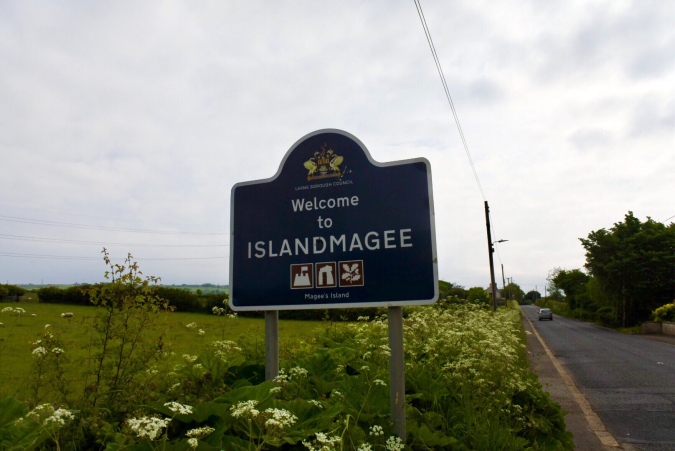 The next place of interest was a statue in the town of Larne. Easier said than done! But Dave, being Dave, had googled it extensively and we were able to track it down. Surrounded by a pre-school, a caravan/camper park and a bowling green, the tribute was dedicated in 1992 to the memory of those emigrants who left Larne in 1717 to go to America. Leaving everything & everyone behind for a new life. It was a poignant reminder of that time and of our own ancestors. I’m very glad we found it.

The next stop was Glenarm Castle & the Walled Garden. Although the 400-year old castle itself is only open to the public on occasion and the castle trial, which goes by the castle was closed for repairs, the walled garden is open to public and is Ireland’s oldest walled garden. 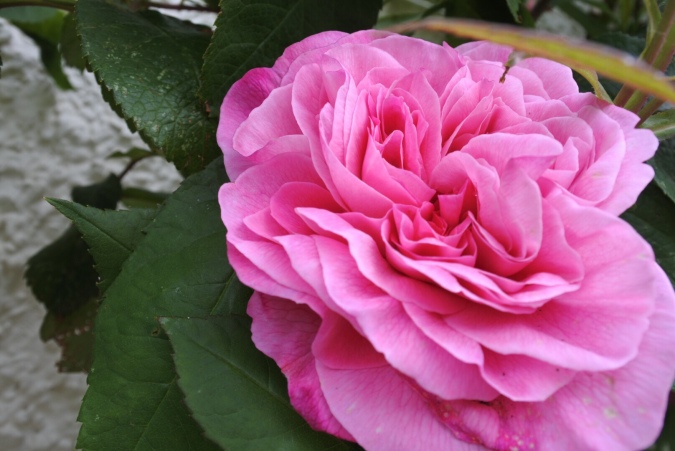 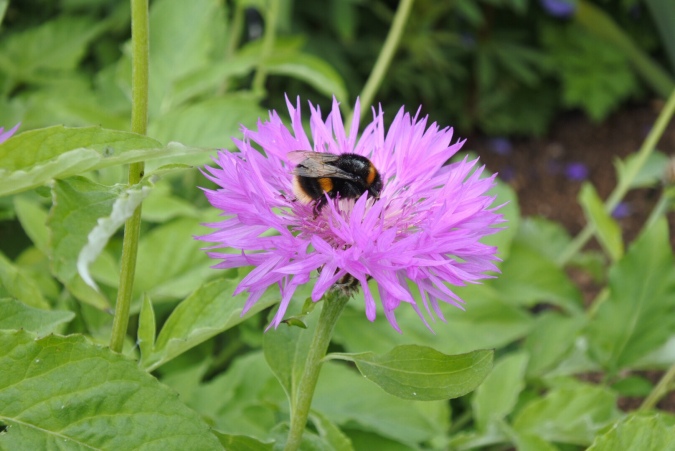 Afterwards, we enjoyed a bite to eat at their lovely tearoom. We both had fruit scones. Dave had coffee, I had tea, of course. As we sat out on their deck, we enjoyed the sweet perfume of David Austin roses clinging the sides of the building and some sheep were grazing in a brilliant, green field. 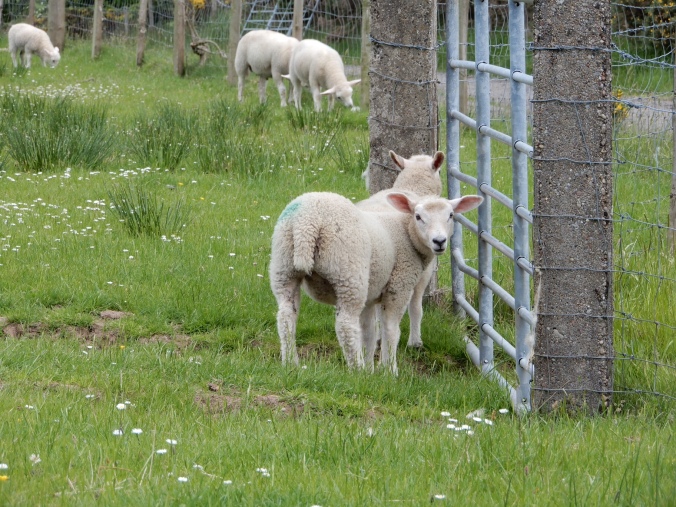 Although we’re visiting during the last spring & early summer bloom period and the garden wasn’t as colorful as it could be, there were still some beauties and well worth a visit to see the attention to detail in maintaining the symmetry needed for some lovely angles and views.

As the drive took us north, we tried to hug the coastline as much as possible. The drive often turned into a winding, narrow single lane that was the width of a farm tractor or cart. Dave had to back up once or twice to allow an oncoming car to safely pass. The eye-level hedges in both sides of the road didn’t allow you to see what was coming around some hair-pin turns. Dave attempted to pull over in as many places possible to allow other cars past. 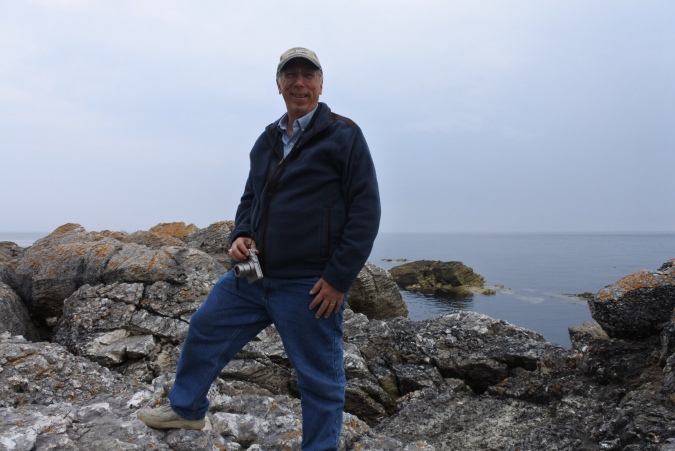 I’m unable to recall all of the places we stopped and what I’m looking at, but suffice it to say, it was all stunning! Even with the fog and haze that crept along the coast. Each small town we drove through and farm we drove past, gave us a wee glimpse into every day life in this cozy spot of the world.

The sun was trying it’s best to shine, but the haze/fog was too much. We lucked out in some of the higher locations where we were able to see for miles and enjoy the many farms, sheep, cows, horses, and accommodating farmers. I’m sure they aren’t as welcoming to the tourist cars clogging their narrow roads.

Out final destination was Ballintoy, where we will staying for four days. What day is today? Who cares…I’m in vacation.

The fog had followed us and was now getting thicker as we found the Ropebridge House B&B where owner Theresa greeted us warmly at the door. Having only had the B&B for about four months, she and her husband have done a great job in providing guests with a warm and inviting home. Our room is on the 2nd floor and looks out over the hills to the ocean. I’m sure Ill have mode to share in the next two days.

Our dinner tonight was the Fullerton Arms. Terrific staff and one of, if not THE best dinners we’ve had in our trip. I had a burger & Dave had a steak & ale pie WITH Guinness of course.

After dinner we went down to the rocky Ballintoy Harbor and explored. The fog and haze was still hanging around, so it only made for an atmospheric setting, the HBO series GAME OF THRONES films around here a lot.

When we arrived back at the inn where I heard one of the two front sitting room calling me. So it grabbed a cup of tea and say there writing my blog. As we were sitting there speaking to the owners, the sun started to peek out from behind the clouds, giving us spectacular sunset at around 9:30. 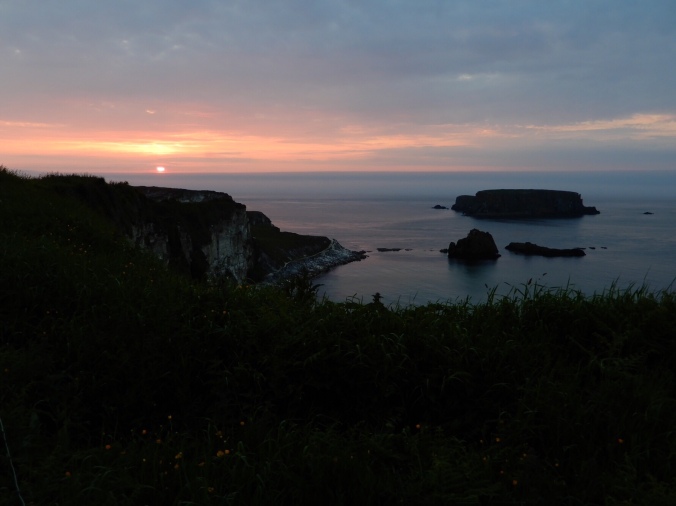 I’m looking forward to not having to pack each morning the next few days!

One thought on “Coastal Irish Coziness”

We are Dave & Heidi from Maine in the US. In 2018, we made a return trip to Scotland and visited Northern Ireland for the first time exploring the areas where both our ancestors emigrated from.